The Regional Natural Park of the Catalan Pyrenees is located on the French slope of the Pyrenean range, along the Spanish and Andorran border. Its 138,000 hectares take up a great part of Haute Cerdagne, Capcir and Haut Conflent, three areas that have a strong personality.

Capcir presents a mountain landscape made of large forest areas, wonderful lakes and generally snow covered peaks. Cerdagne forms a wide high plain where you can see grazing flocks and flowered meadows in spring and huge snow-covered extensions in winter. Conflent has a rather Mediterranean climate and endless valleys with terraces and dry stone walls, gardens and vegetable gardens along irrigation canals as well as hanging villages.

This mountain area hosts thus a wide variety of exceptional landscapes located between 300 and 3,000 metres above sea level. These massifs in contact with the Mediterranean climate also host a big range of fauna and flora.

Parc Naturel Régional des Pyrénées Catalanes all year round! The territory is crossed over by the popular Train Jaune (Yellow Train), which has travelled the 62 km between Villefranche- de-Conflent and Latour-de-Carol since 1910. In addition to this important tourist resource of sustainable mobility, the Regional Natural Park hosts 7 ski resorts and 5 spa resorts. Another great characteristic of the destination lies in the high number of sunny days. This mild climate invites you to hike through the Park all year round using the wide network of marked paths such as the GR-10 long-distance hike, among others.

The historical and cultural wealth of the region is present at every corner. Dry stone walls and huts, Romanesque churches, baroque art and all the history linked to the Treaty of Pyrenees of 1659 are just a few examples of it.

House of the Regional Natural Park – La
Bastide – Olette Bead office of the Park located in an “eco” building built on a fortress dated 14th century that still preserves the two original towers and part of the wall that used to join them. The House includes an Interpretive path about local history, a vegetable garden with ancestral species and a space dedicated to a colony of small rhinolophidae, a protected species of bats.
Further information:
www.parcs-naturels-regionaux.fr/producteur/maison-du-parc-accueil-informations

Mont-Louis is one of the 9 cities that were totally designed by architect Vauban in the 17th century. Villefranche-de-Conflent is a medieval town that dates back to the 11th century whose walls were enhanced and reinforced by Vauban, who also built the hospital, the quarters and other fortifications, especially the citadel, Fort Liberia.
Further information:
www.pyrenees-cerdagne.com/en and
www.tourism-canigo.com
Mont-Louis – Villefranche-de-Conflent – Fort Liberia

These caves are open to the general public. The first one is located in Fontrabiouse, in the Capcir region, and has its origin in a marble and onyx quarry. The entrance of the latter is located just 300 metres distance from Villefranche-de-Conflent.
Further information: www.pyrenees-catalanes.net and www.tourism-canigo.com

Caves of Fontrabiouse and Grandes
Canalettes
This ethnological and historical museum is located in the old farm of Cal Mateu (18th century). It offers a wide range of pedagogical activities, mainly focused on the cultivation of a mountain vegetable garden. Further information: www.pyrenees-cerdagne.com/en

Museum of Cerdagne – Sainte-Léocadie
With more than 3,000 sunlight hours a year, the solar oven of Mont-Louis (the first in the world, built in 1949) and Font Romeu-Odeillo-Via (1970, focused on research) are part of the landscape and two mandatory visits. Do not miss Thémis Solar Station and its research projects!
Further information:
www.pyrenees-cerdagne.com/en

Solar ovens in Mont-Louis and Font
Romeu-Odeillo-Via and Thémis Solar Station
Saint-Thomas Health Centre allows you to enjoy 37-degree sulphurous baths in the middle of a stone circus. In Dorres and Llo, you can do it in a wonderful environment. Two towns owe their names to their spa centres: Vernet-les-Bains and Molitg-les-Bains (in
French “bain” means “bath”).
Further information: www.tourism-canigo.com and www.pyrenees-cerdagne.com/en

Spa Centres of Dorres, Llo and Saint Thomas
Some of these reserves host Information Desks and exhibitions and offer guided tours as well as activities aimed at discovering the natural, historical and archaeological heritage of the region.
Further information: www.pyrenees-catalanes.net,
www.pyrenees-cerdagne.com/en and
www.tourism-canigo.com
Natural Reserves of Conat, Eyne valley, Jujols, Mantet, Nohèdes, Nyer and Py

Most identifiable geographical areas
and elements

List of transport for sustainable mobility within the territory 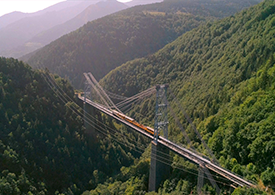 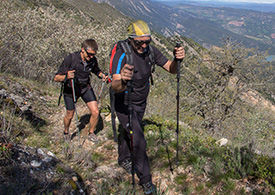 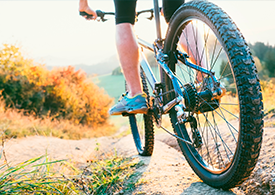 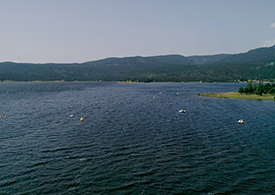 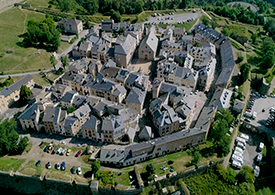 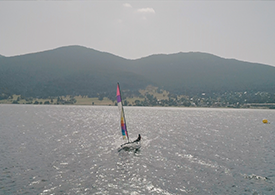 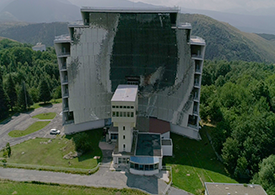 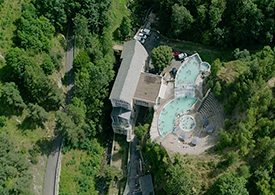 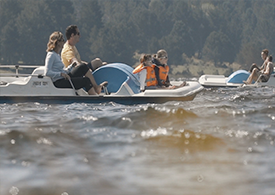 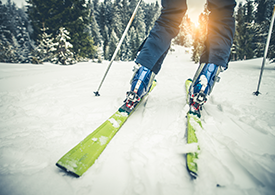 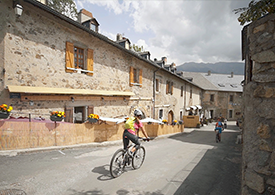